This Friday released the highly anticipated Hollywood biggie Fast & Furious Presents: Hobbs & Shaw has registered an impressive total in the opening weekend at the Indian box office. The movie started its journey on an excellent note with rave reviews and remained super-strong throughout. 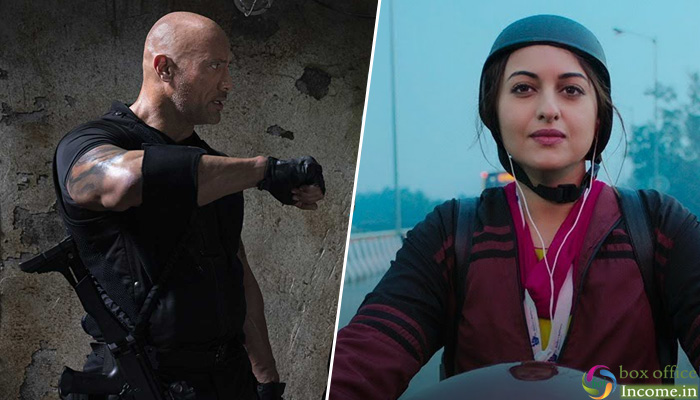 Starring American superstars Dwayne Johnson and Jason Statham, action thriller Hobbs & Shaw has got succeed to hit the target right and impressed all the viewers. For its solid plot, high octane actions & stunts, it has received very positive reviews from the critics.

On the opening day, Hobbs and Shaw took a dominating start despite having several Hindi releases in parallel. With an overall 40-45% of occupancy nationwide, it did the business of 13.15 crores on Friday. Due to a strong word of mouth, the movie witnessed a noticeable growth and minted 13.75 crores on Saturday.

On the next day i.e. Sunday, David Leitch’s directorial recorded a remarkable jump and bagged the amount of 16 crores. With this, its total collection after 3 days has become 42.90 crores nett at the Indian box office.

On the other hand, new Hindi offering Khandaani Shafakhana has unfortunately received mixed feedback and got failed to divert major audience toward itself despite being backed by the popular franchise. On the first day, it raked the business of only 0.80 crore with around 9-10% of occupancy.

Over the weekend, it reported limited growth and registered the business of 0.90 crores on Saturday and 1.30 crores on Sunday. With this, the total collection of Shilpi Dasgupta’s directorial has become 3 crores at the domestic box office.