After penning his thoughts about the prevailing fear amongst the nation due to the second wave of Corona Virus in his first poem, Maniesh Paul presents yet another stirring note with ‘Sab Achcha Ho Jaayega’. Providing a sense of relief and positivity in the times of despair, Maniesh’s second poem is a hopeful message encouraging everyone to wait for the light at the end of the tunnel. 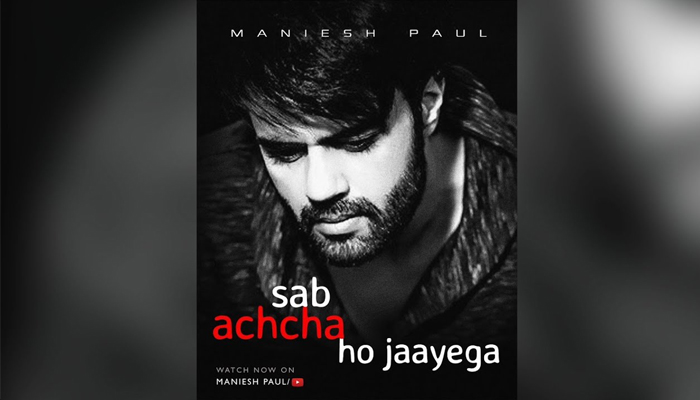 Beautifully encapsulating the emotions of the public, Maniesh Paul’s poems have been resonating with the audience for its relatable content. Hard-hitting yet heartening, Maniesh strikes the perfect balance of emotions through his words. Addressing the hope and determination of the people, Maniesh offers consolation to the scared souls fighting the catastrophic events around, through the poem. Propagting the message to help and support one another in the desparate times, the multi-talented artist presents a touching swarm of emotions.

Receiving a warm response for his poem ‘Aajkal Neend Nahi Aati’ , Maniesh Paul was showered with love and appreciation by netizens as well as the film fraternity. Earlier last year, Maniesh Paul presented the poem ‘Chawkhat Hi Ab Charam Hai’ with an impactful voice over and visuals that was praised by many celebrities including a special note from Amitabh Bachchan.

Maniesh Paul has been using his social media platforms to create awareness, offer positivity and help the needy through the various phases of Covid-19. While earlier last year, Maniesh created short films like ‘What If’ to depict the severity of the situation, this year, Maniesh has been using the mediums to connect with several members belonging to the varied sectors of the society with his podcast ‘The Maniesh Paul Podcast’.

A true entertainer having his imprints across the diverse mediums, Maniesh Paul has scaled an inspirational journey from a VJ, RJ to being crowned as the ‘Sultan of the Stage’ with innumerable livbe shows and long list of television reality shows to his credit. Creating ripples on the silver screen as well with intriguing performances, Maniesh Paul is touted as the ‘Entertainment Extraordinaire’, gearing up for the release of his upcoming film ‘Jug Jugg Jeeyo’ under the banner of Dharma Productions.