Ayushmann Khurrana and Junglee Pictures, who are known to bring forward the most unique content with subtle social messaging such as Badhaai Ho & Bareilly Ki Barfi, are back with another entertainer, Doctor G. Ayushmann Khurrana, the name has become a genre in itself. Known for his concept driven films ranging from being a sperm donor in Vicky Donor to dealing with erectile dysfunction in Shubh Mangal Saavdhan, his films though bold in nature have always been lapped up as a family entertainer. This time around, his next, Doctor G, shows him portraying the role of a male Gynaecologist in a medical campus comedy-drama and has received an A certification which is advisory for 18+ audiences, making it a first for Ayushmann. 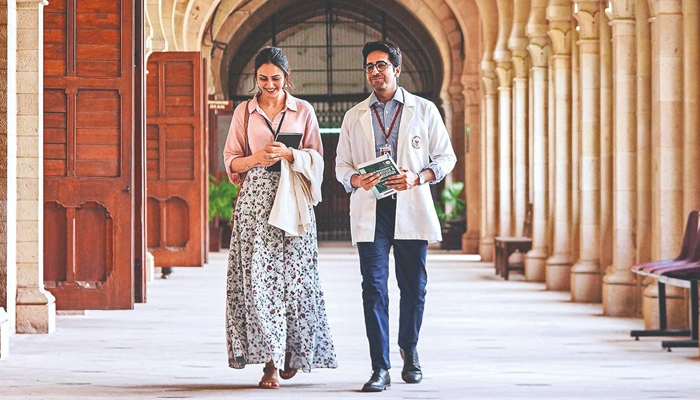 Ayushmann Khurrana starrer ‘DOCTOR G’ is a journey of an aspiring orthopedic surgeon who instead gets into the gynaecology department, being the only male in a woman dominated department, there begins his humorous struggle to fit in. Staying true to the ethos of the medical campus and a journey to becoming a doctor as seen in the trailer, the film promises to showcase the events inspired by real life in a humorous way.

Post pandemic the audiences, especially young adults have been exposed to authentic, unfiltered, and bold content courtesy OTT platforms. In a day and age where such content is accessible, it is only fair that the audiences get the same experience on the big screen. Junglee Pictures and Ayushmann Khurrana made a conscious call to not alter the film and take the ‘A’ certification in the interest of providing a film that is high-on-humour and in a narrative that is meant to be watched in its truest form.

Amrita Pandey, CEO Junglee Pictures says – “The movie is bold, high on entertainment yet subtly breaks stereotypes as one might expect from a true Ayushmann Khurrana film. Despite not having any explicit content, it is a movie for young adults who are exposed to bold yet sensitive and hilarious content and can of course watch it with their families. We are happy there were no cuts suggested and we are able to present the film as is in the theatres, also being under 2 hours, Doctor G will have a refreshing and engaging appeal”

Anubhuti Kashyap, Director says – “Midst all the action, thriller and fantasy led movies that have released recently, Doctor G is a fun comedy-drama that is clutter breaking and will be a refreshing watch for the audience. The trailer has been received so well and that is just a glimpse of the comedy and entertainment that’s in store during the film. I am glad the audience will get to watch the film in its entirety that will stay with them for a long time”

From recently released and much talked about trailer, we can see the subject of the film is bold yet universal in nature that will be accepted by the masses as a whole. Now that the film has got an ‘A’ certificate, it would be a fun watch to experience with friends.