Known for giving audiences some of the most iconic romantic songs, Bhushan Kumar’s T-Series now brings to you ‘Radha’, a contemporary song of young love, headlined by the country’s youngest pop sensation, Dhvani Bhanushali. While Dhvani is a record breaking artist in the pop music genre, she now takes on a soulful track with a modern vibe penned by Kunaal Vermaa and composed by Abhijit Vaghani. With its interesting lyrics, soothing melody and easy listening – house music undertones, ‘Radha’ expresses love and innocence in the most artistic manner. 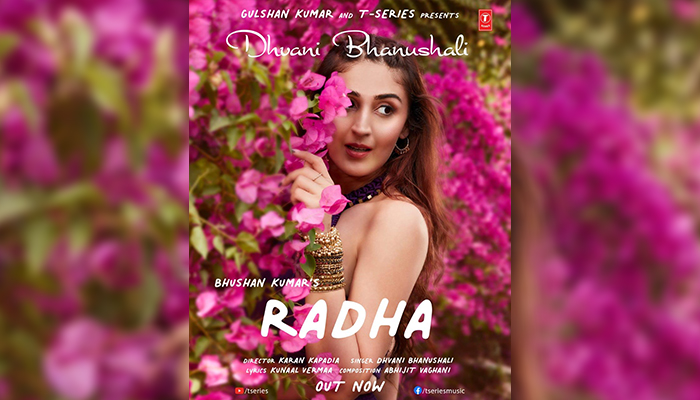 Directed by Karan Kapadia, with cinematography by the award winning Ravi Varman, the song was shot in Alibaug, depicting elements of nature. Sporting some surreal vibrant looks, Dhvani Bhanushali looks like a dream against the picturesque backgrounds, as the visual extravaganza promises to have the audiences hooked.

Talking about the song Dhvani Bhanushali says, “Radha is very different from the kind of songs I’ve done before. It depicts the innocence of falling in love and being happy in the moment. I had a blast shooting for the music video with Karan. He and Ravi Sir have taken the song so higher with their concept and look how beautiful each frame looks. Also, Rajit has choreographed some cool steps to dance to. Bhushan Sir always has been very supportive and he has loved the song that we have created. I can’t wait for everyone to watch this one.”

“Radha is a modern yet timeless love song. Abhijit has done a great job on the composition and Dhvani with her individualistic style, brings the song to life. With Karan and Ravi shooting the video, we can see how beautifully they with their ideas transformed the song into something unique.” says T-Series head honcho, Bhushan Kumar.

Composer Abhijit Vaghani says, “Dhvani and I were randomly jamming together one day and there we created the hook of Radha. Kunaal’s beautiful words in Dhvani’ voice is a definite win. The video is has looking exceptional. ‘Radha’ is a song the youth will especially relate to.”

Ace Cinematographer Ravi Varman says, “Dhvani herself is a very happy-go-lucky person and when you hear the song you imagine light, positivity, colours and grandness. The goal with ‘Radha’ was to make every frame a visual delight. I’m happy that we managed to pull it off and hope audiences enjoy the song.”

After directing several TVCs, Director Karan Kapadia quotes, “This is my first attempt at directing a music video and it was a fun collaboration with Dhvani and T-Series. Being a young girl herself, we could experiment and do several varied shot with Dhvani. Ravi has successfully captured the vibe of the song.” Radha is out now on T-Series’ YouTube channel.