The latest political action-masala Tamil film NGK (Nandha Gopala Kumaran), has been released on Friday across the country as well as overseas. Being one of the much awaited Tamil movies, superstar Suriya starrer NGK had enormous pre-release hype among his fans and as expected good opening. 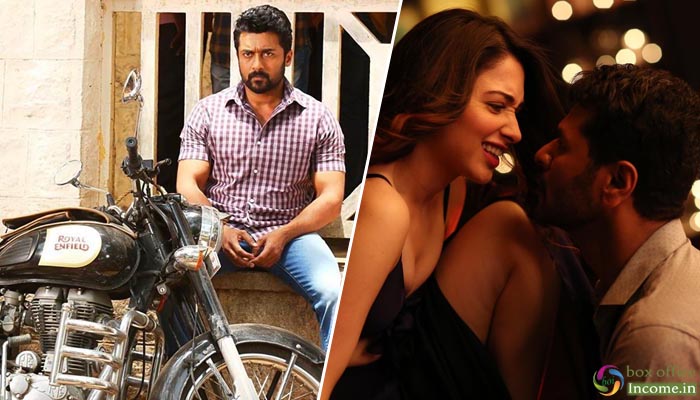 Audience found it a perfect masala entertainer and showed big thumbs up. From critics also, NGK has received positive reviews and gained good word of mouth. All are praising Suriya for his wonderful performance in the movie. Leading ladies Sai Pallavi and Rakul Preet Singh are also being appreciated for their charming performance.

On the opening day, Selvaraghavan’s directorial NGK has started its journey on a good note in India and international market as well. Reportedly the movie has been released on more than 1400 screens globally.

Anyhow, As expected it has witnessed more than 80% of occupancy in Tamil state and recorded the business of 13.70 crores, 2.05 crores from Telugu States, 2 crores from Karnataka, 0.69 crores from Kerala, Rest Of India 0.35 crores and 2 crores from Overseas (Total:- 20.79 crores) at the worldwide box office.

After noticing such immense excitement of fans and positive word of mouth, the movie is expected to remain steady throughout the opening weekend. The film is being produced by S. R. Prakashbabu and S. R. Prabhu of Dream Warrior Pictures.

On the other hand, Prabhudeva and Tamannaah Bhatia starrer horror comedy Devi 2 have also released with high buzz but got failed to impress viewers thoroughly and getting mixed reviews. On Friday, A.L. Vijay’s directorial started the journey on a lower note than NGK but good and garnered the business of 3.60 crores at Tamil Nadu box office.