Production banner Pooja Entertainment unveils the first look of upcoming film ‘Coolie No.1’ starring Varun Dhawan and Sara Ali Khan. Directed by David Dhawan, who directed the original starring Govinda and Karisma Kapoor in the lead roles. Here are the main posters, check them out. 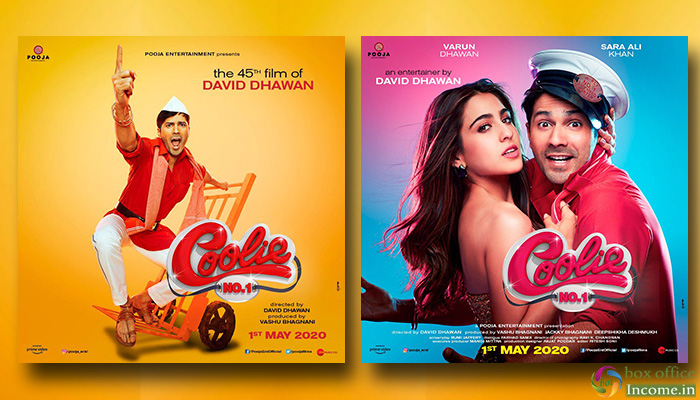 The new posters feature Varun and Sara; their fresh chemistry is something to look forward to. Sara looks as gorgeous as ever and Varun is killing it in this new avatar of a coolie. Also, reports have that Paresh Rawal will be seen reprising late Kader Khan’s role. The remake has already gone on floors in Bangkok.

Apart from this, Varun will also be starring in Remo D’Souza’s upcoming dance film Street Dancer. The movie features Shraddha Kapoor as the female lead and Nora Fatehi and Aparshakti Khurana in supporting roles. Street Dancer will release in January 2020.

On the other hand, Sara will be starring in Imtiaz Ali’s next alongside Kartik Aaryan. The flick is the second instalment of Imtiaz’s 2009 hit movie Love Aaj Kal that featured Saif Ali Khan and Deepika Padukone in lead roles. It is scheduled to release on Valentine’s Day next year.

Coolie No. 1 is the story of a rich girl who falls in love with a poor coolie much to the disapproval of her rich father. Produced by Vashu Bhagnani, Jackky Bhagnani and Deepshikha Deshmukh. Penned by Farhad Samji, Coolie No 1 is slated to release on May 1, 2020.