There’s no stopping for the nation’s heartthrob and crush Kartik Aaryan. The actor continues doing a great job at the movies and he’s signing some of the biggest brands in the ad world. The starboy has been signed by a popular international brand to become the chief ambassador. 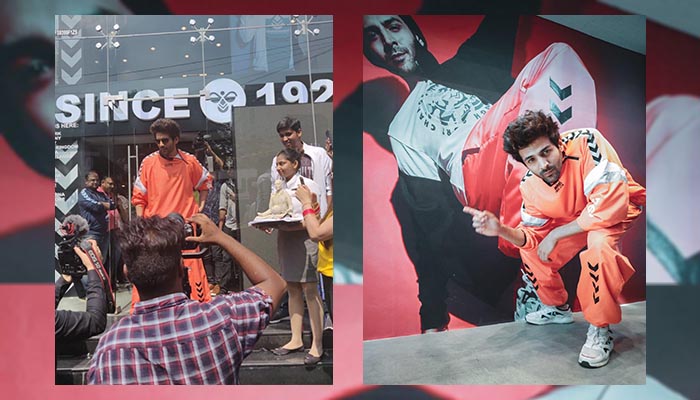 The Danish, sport style brand hummel enters has entered the Indian market and opening 5 stores nationwide. To launch the famous brand in India, hummel got the rising star Kartik Aaryan on board as their face.

The launch was held in Bangalore, where a huge crowd had gathered to catch a glimpse of the Luka Chuppi actor. The actor who’s known for his style and fashion and is always impeccably dressed whether at the red carpet or at the airport, was the perfect pick for the brand.

Sharing the experience to be a part of the popular sports brand, the actor said at the store opening, “In hummel I see a perfect fit. hummel appeals to my style sensibilities, it is bold, fashionable, creative & youthful. I am excited that hummel has entered the retail space and I am sure that the Indian audience will love the designs that hummel has bought to India.”

Post the event several fans of Kartik were gathered outside the store and the actor was almost mobbed. A video has gone viral where few of the girls go emotional after catching a glimpse of the actor and can’t contain their excitement.

Kartik Aaryan is rightfully called the nation’s crush and the actor deserves all the fame and adulation he keeps getting. Kartik will be next seen in the remake of BR Films classic Pati Patni Aur Woh and Imtiaz Ali’s next untitled film. Good times are here for the starboy!