Kartik Aaryan, who’s in the throes of success and is ruling the hearts of millions is a known fact. The heartthrob’s popularity among the masses is sky-rocketing and his fan base is growing by leaps and bounds every single day. 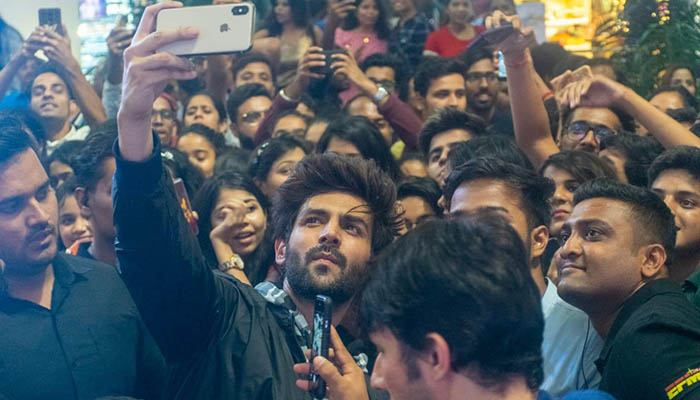 Recently, one witnessed the craze about the Luka Chuppi star at one of the biggest malls in Mumbai, where the actor was present to unveil the latest collection of Mufti, a brand that he endorses. As soon as Kartik stepped out from his car, he was surrounded by large number of fans who wanted to click selfies and interact with him.

Needless to say, the charming actor sweetly obliged to their request, as he always does. However, the young rising star of B-town was completely unaware of the storm of people waiting for him inside the mall and was pleasantly surprised to see that so many of his fans had gathered for him.

Upon hearing that Kartik Aaryan would be present at the mall to unveil the latest collection of Mufti, all his fans had reached the mall to catch a glimpse of him. The mall was packed with thousand of his fans, who wouldn’t stop hooting and cheering for him. To witness this craze for Aaryan was a spectacle to watch out.

Kartik interacted with the crowd and even invited a few of them on stage. Kartik’s fans not only gave him a warm welcome but also showered him with so much love that he was simply overwhelmed by their affection. After all the nation’s heartthrob deserves all the love, adulation and success.

Kartik will be next seen in the official remake of ‘Pati Patni Aur Woh’ where he is sharing screen space with Ananya Panday and Bhumi Pednekar. The actor will also be seen in Imtiaz Ali’s sequel to ‘Love Aaj Kal’ starring alongside Sara Ali Khan.