The makers of Bhuj: The Pride Of India have dropped the trailer of Ajay Devgn, Sanjay Dutt, Sonakshi Sinha starrer period war drama with the heavy-duty dialogues. Directed by Abhishek Dudhaiya, the film going straight to digital release on August 13, on Disney+ Hotstar. The film recalls the 1971 India-Pakistan war and severs up a heroic story bursting with patriotism, songs and punch lines for each actor. 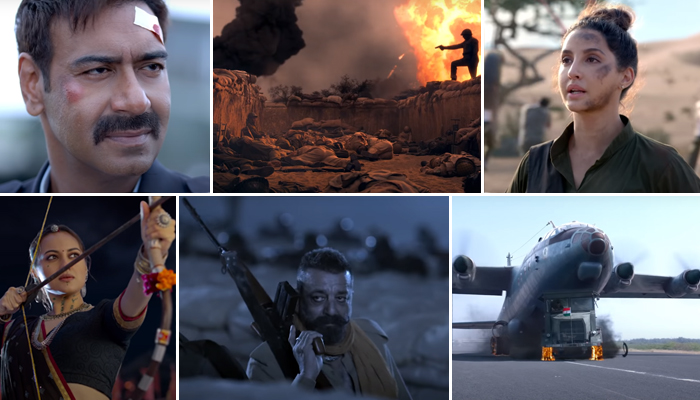 Sharing the video on Twitter, Ajay Devgn wrote, “When bravery becomes your armour, every step leads you to victory! Experience the untold story of the greatest battle ever fought, #BhujThePrideOfIndia.”

The 3 mintues 21 seconds trailer follows Ajay who plays IAF Squadron leader Vijay Karnik. Karnik was left in charge of the Bhuj airport at the time of the war, and the film is set to details how he saved the area from the Pakistani army and re-constructing an entire IAF airbase along with the help of 300 women from a local village in Madhapar.

The trailer also shows glimpses of Sonakshi and Nora’s characters who are ready to lay their lives for the country. Sanjay Dutt is also seen as a leader in Madhapar who joins the war to aid the Indian army. Meanwhile, the film also stars Ammy Virk and Sharad Kelkar in pivotal roles.

Bhuj: The Pride of India is presented by T-Series and Ajay Devgn Films. It is produced by Bhushan Kumar, Kumar Mangat Pathak, Ginny Khanuja, Vajir Singh, and Bunny Sanghavi. The film has been written by Abhishek Dudhaiya, Raman Kumar, Ritesh Shah, and Pooja Bhavoria.