Bhuj The Pride of India starring Ajay Devgn, Sonakshi Sinha, Sanjay Dutt, Ammy Virk, Nora Fatehi, Sharad Kelkar, Pranitha Subhash and Ihana Dhillon has been headlining the news ever since its announcement. The makers have been raising the anticipation with the intriguing posters and have finally unveiled the teaser of the film. 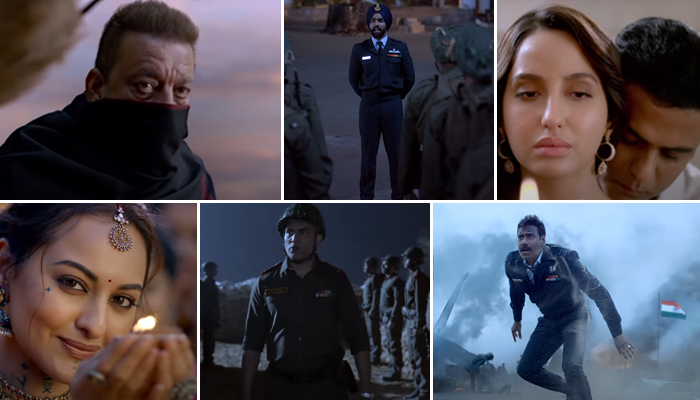 In the teaser, Bhuj which is set in 1971, features the land, water and air against the backdrop of a burning nation. Packing a punch with its patriotism and valour, the brief 32-second teaser also gives glimpses of song and dance, the Indian Air Force and the tricolour as well as a suave Ajay Devgn.

The war drama will see Ajay Devgn donning the Indian Air Force uniform for the first time onscreen as he is essaying the role of Squadron Leader Vijay Karnik. And while the fans have been eagerly waiting for the movie, there can soak into the teaser and trailer that is set to release on Monday i.e tomorrow, 12 July.