Proucer Bhushan Kumar is back with the second installment of his comedy psychological thriller franchise, that was begun with 2007’s Bhool Bhulaiyaa starred Akshay Kumar and Vidya Balan. The upcoming one is titled Bhool Bhulaiyaa 2 starring Kartik Aaryan in lead roles. 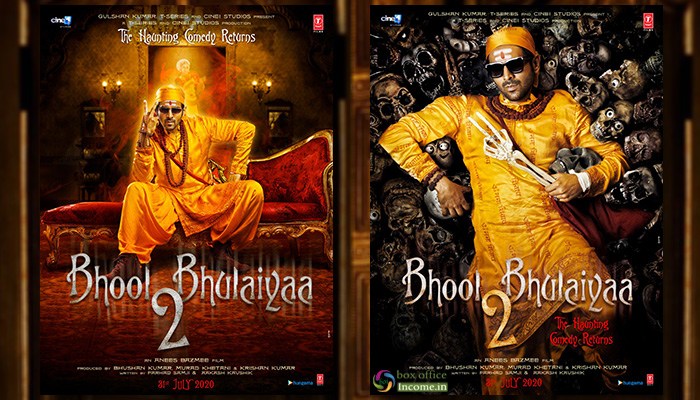 Kartik Aaryan as in the posters revealed by the makers can be seen donning the ‘saadhu’ avatar, with ‘om namah shivaya’ written all over his attire with the traditional ornaments just complimenting it fine. However, there’s a twist here, with the trendy shades and shoes, looks like post it’s all been filmed based on today’s era.

Rumours were rife that the makers are willing to cast a young actress opposite Kartik. While there has been a lot of rumours about the new gen actresses – Sara Ali Khan, Ananya Panday as well as Janhvi Kapoor being a part of the sequel as the leading lady, looks like the wait isn’t going to be too long!

It was also recently reported that Akshay Kumar is all set to have a special role in the film. Is it a cameo or extended appearance, only time will tell but as of now, the makers are waiting for a nod from Khiladi. Directed by Anees Bazmee, the film is set to hit the screens on July 31, 2020.