Pooja Entertainment’s upcoming massive action entertainer ‘Bade Miyan Chote Miyan’ finally goes on floor. After months of extensive prep BMCM kicked off with a big auspicious Mahurat with producers, the entire cast and crew and well-wishers from the film world who were part of this exciting moment. 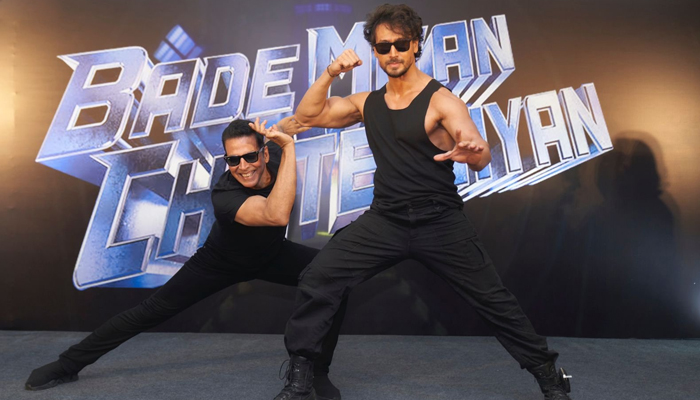 At the mahurat ceremony. Akshay Kumar and Tiger Shroff were seen in action avatars. Both actors donned all-black looks. Akshay wore a black T-shirt with trousers and boots, while Toger complemented him in a tank top and cargo pants.

In one of the images shared online by Akshay, they were seen doing kung fu gestures. Akshay poked fun at his co-star Tiger in the caption to his post as he wrote, “A film I’ve been most eager to start #BadeMiyanChoteMiyan! Adding to the adrenaline rush is my Chote @iTIGERSHROFF Hey Chote, you better remember during the shoot that you were born the year I started my career (sic).”

The film is the second in the franchise after the 1998 hit Bade Miyan Chote Miyan, starring Amitabh Bachchan and Govinda. Sharing a note on the occasion, producer Vashu Bhagnani wrote on Instagram, “After 25 years, we gear up to return with our most successful franchise ‘Bade Miyan Chhote Miyan’! It was special then and it is even more special now with two exceptional SuperStars leading the title @akshaykumar and @tigerjackieshroff and now with @therealprithvi also on board Directed by @aliabbaszafar together we will recreate a brand new Avataar of BMCM! Need ur blessings and good wishes as we begin to Shoot.”

Jackky Bhagnani, who also looks after Pooja Entertainment, wrote on the same social media platform, “After months of toiling, dreaming and strategizing, we are ready to begin this massive ambitious journey. Truly humbled and honoured to stand alongside my ‘Bade’ and ‘Chhote’ without their nod my dream to achieve this wouldn’t have come true. @akshaykumar @tigerjackieshroff I’m overwhelmed and it’s a moment of immense pride and joy for us at Pooja Entertainment. Love, adore and respect these two and I can’t wait for the audiences to see what we have in store. So thankful to my Dad @vashubhagnani for believing and backing us and to my entire team and everybody associated with this film. Can’t wait to roll on this one.”