Bollywood’s one of the most talented actor Ayushmann Khurrana is coming back to entertain us with a thrilling investigative drama, titled as Article 15. Directed by Anubhav Sinha, the film is slated to be released on 28 June 2019. 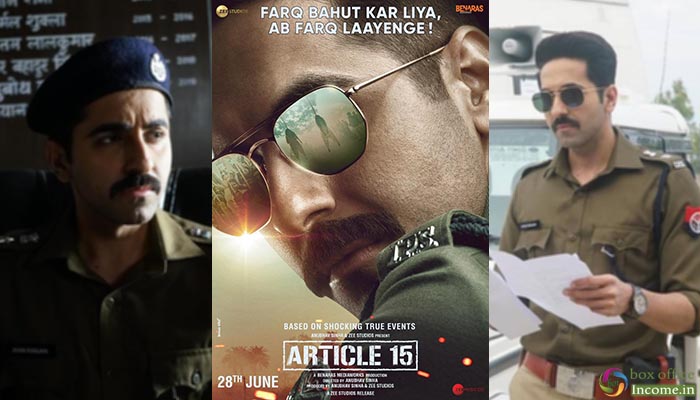 To create pre-release buzz, recently makers have unveiled the first look poster and teaser of the film, which is being liked by everyone. Anyhow, The first poster of the film shows Ayushmann in a cop avatar, a role he will be seen playing for the first time.

The teaser shows a narration of how Article 15 of the constitution entails that there shall be no discrimination on basis of cast, race, religion, s*x or place of birth, and visuals in the teaser how the reality is strikingly different. The teaser ends with the hard-hitting message of “Farq Bahut Kar Liya, Ab Farq Laayenge”.

Alongside the teaser, there is one more cherishing news for fans that the official trailer of the movie is likely to release on May 30. Article 15 also stars Isha Talwar, M Nassar, Manoj Pahwa, Sayani Gupta, Kumud Mishra and Mohammed Zeeshan Ayyub. It has been Directed by Anubhav Sinha, Produced by Anubhav Sinha and Zee Studios