On the occasion of Dusshera, Aayush Sharma launched the glimpse into his upcoming film, the untitled project #AS03 marks his third film in Bollywood. Offering an insight into the fierce, raw and rustic world of the jungle, AS03 signifies the good over evil, with subtle references to Ramayana. 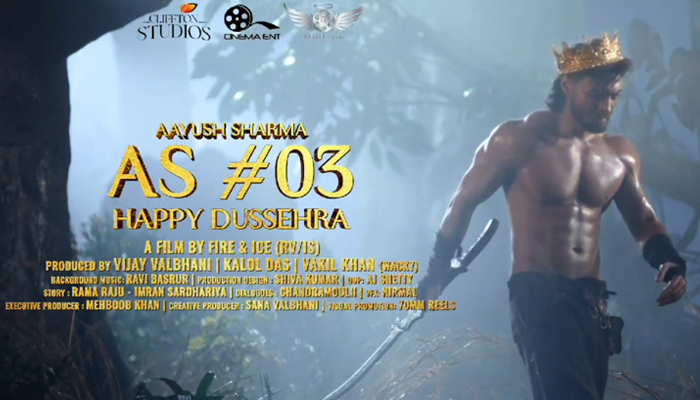 Following the trend prevailing in the South Indian market, Aayush Sharma’s third film is announced by the makers as AS03, marking the first one to do so in Bollywood. Keeping details under the wrap, Aayush Sharma has revealed the teaser for the mytho modern action adventure, hitting the theaters in 2023.

Recently, sharing workout videos and pictures, Aayush piqued the curiosity of the audience regarding his upcoming project. Now, the teaser unleashes the beast mode of Aayush Sharma with his bulked and toned body, with a warrior personality.

Aayush Sharma shares, “AS03 is a very special film with an astonishing concept that instantly connected with me. This is a very unique, intriguing and exciting film, with an extremely skilled team employed to deliver the best for the exemplary vision and concept. I am amazed everyday working on it, and looking forward for the audience to explore this world.”

Backed with remarkable VFX and cinematography, the teaser promises to be a visual treat for the audience building excitement for the film. The upbeat and intense background music adds to the mystery and intrigue of the teaser.

Earlier, Aayush Sharma had also announced yet another film with an intriguing still. After the remarkable success of Antim: The Final Truth, Aayush is on an upward graph of growth with diverse and interesting performances, one after another.