Allu Arjun, in August 2020, announced his next project Pushpa. It is one of the most ambitious films and will have a simultaneous release in five languages including Hindi and a pan India footprint. 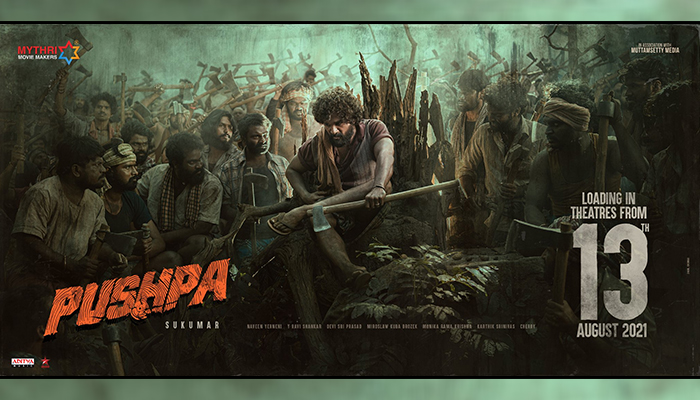 This movie also marks his third collaboration with filmmaker Sukumar after successful hits and acclaimed films like Arya and Arya 2. Allu Arjun, today, announced the release date of the film. Coming during Independence Day weekend, the film is set to release on August 13, 2021.

Producers Naveen Yerneni and Ravi Shankar share, “It makes us very happy to announce the release date of Pushpa. We’re shaping the action thriller as a pan-India film that can be enjoyed by viewers of all languages. With the massive star power of Allu Arjun on our side, we are confident that the storyline will get more than its due. It is a gripping story and we’ve furthered our cause to bring the audiences fresh and impactful content with Pushpa.”

The star is now all set to inject confidence into the experience of watching movies in the theatres with the announcement of the release date of his much-awaited next Pushpa. The film stars Rashmika Mandanna, Dhananjay and Sunil. The forthcoming film is being produced under Mythri Movie Makers in association with Muttamsetty Media with Devi Sri Prasad scoring its music.

The Allu Arjun-starrer chronicles the red sanders heist in the hills of Andhra and it depicts the convoluted nexus that unfurls in the course of the narrative of a man who is taken by avarice. Pushpa will be released in Telugu, Tamil, Kannada, Malayalam, and Hindi.