Vivek starrer much-anticipated biographical drama PM Narendra Modi took an average start at the box office but picked up very well over the weekend due to positive word of mouth. Now it has entered on weekdays and still has a good hold over the audience. 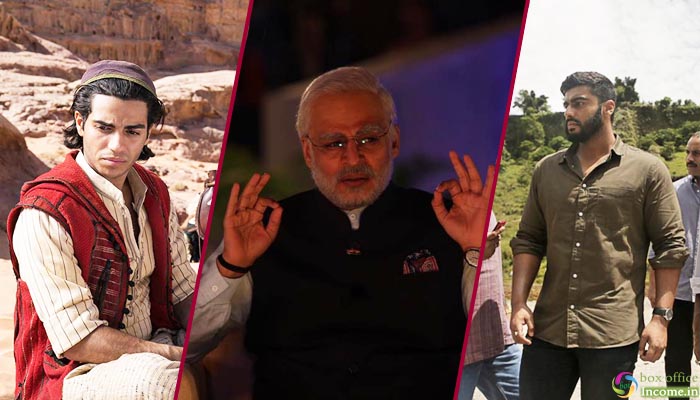 Directed by Omung Kumar, PM Narendra Modi has received positive reviews also faced a competition due to India’s Most Wanted, Hollywood Aladdin & last Friday release De De Pyaar De. So, In the opening weekend, it did the business of 11.76 crores which included 2.88 crores on Friday, 3.76 crores on Saturday & 5.12 crores on Sunday.

Then on Monday, it recorded a drop and managed to collect the amount of 2.41 crores. With this, the total collection of PM Narendra Modi after 4 days has become 14.17 crores nett from around 1200 screens .

On the other hand, Arjun Kapoor’s highly-promoted India’s Most Wanted has received negative reviews from the viewers but still took an average start. In the opening weekend, it registered the business of 8.66 crores that included 2.10 crores on Friday, 3.03 crores on Saturday & 3.53 crores on Sunday.

Now Raj Kumar Gupta’s directorial this crime thriller has stepped-in on weekdays and faced a considerable drop in footfalls. On Monday, India’s Most Wanted minted the amount of 0.90 crore with a drop of 55% than Friday and raised 4 days total to 9.56 crores.

In opposite to these two, there is a much-awaited Hollywood movie Aladdin which is getting a quite good response from the Indian audience. In the first weekend, it scored 18.50 crores with 4.25 crores on Friday, 6.50 crores on Saturday & 7.75 crores on Sunday.

On Monday, Will Smith starrer got dropped and garnered the business of 3.75 crores. With this, the total collection of Aladdin after 4 days has become 22.25 crores nett including all the versions.