Producer Sajid Nadiadwala had confirmed that he is all set to collaborate with the Bollywood Action Hero Akshay Kumar for his next venture. Now finally they have introduced the film titled Bachchan Pandey among all and also locked it’s release for Christmas 2020. 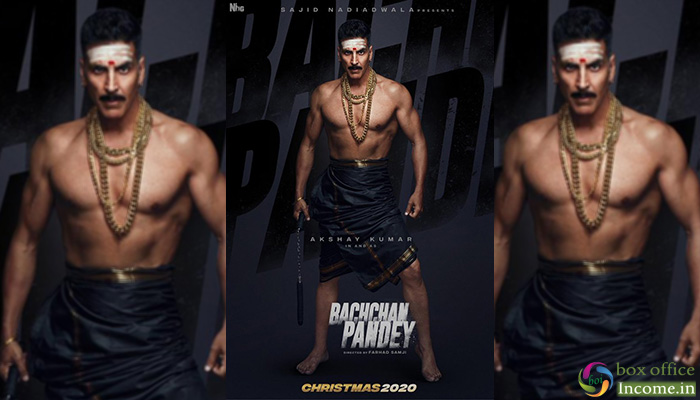 On Thursday, July 25 evening, Nadiadwala Grandson left his fans wondering with a tweet, they wrote “Excitement level – Loading ⏳ P.S. – We are eager to know your guesses 😉#SajidNadiadwala @WardaNadiadwala”.

Next day i.e. on Friday as promised, they made announcement about his new collaboration with Akshay Kumar and shared the first look poster of the film. Sajid Nadiadwala’s production house captioned, “Christmas 2020 just got merrier! 💥Presenting #SajidNadiadwala’s next with  @akshaykumar In & As #BachchanPandey 🔥directed by  @farhad_samji @WardaNadiadwala”.

Akshay also took to twitter to share the news with fans, he tweeted, “Coming on Christmas 2020! In & As #BachchanPandey 😎 In #SajidNadiadwala’s Next, directed by @farhad_samji @NGEMovies @WardaNadiadwala”. The actor is very much excited to collaborate with Sajid Nadiadwala.

The poster features Akshay Kumar in a South Indian rowdy look. Talking about Bachchan Pandey, the same is a massy and will give you Rowdy Rathore feels. He’s wearing a black lungi along with gold jewellery around his neck and the weapon ‘Nan Chaku’ in his hand.

Apparently, the movie will go on floors in the first half of 2020. With the first look, undoubtedly this upcoming film looks very entertaining and promises a high ride for fans.