On July 05, 2019, superstar Akshay Kumar has shared first look poster of upcoming Hindi drama film Mission Mangal. Directed by Jagan Shakti, it is based on the Incredible true story of India’s Mission To Mars. ‘Mission Mangal’ is scheduled to release on Independence Day i.e. August 15,2019. 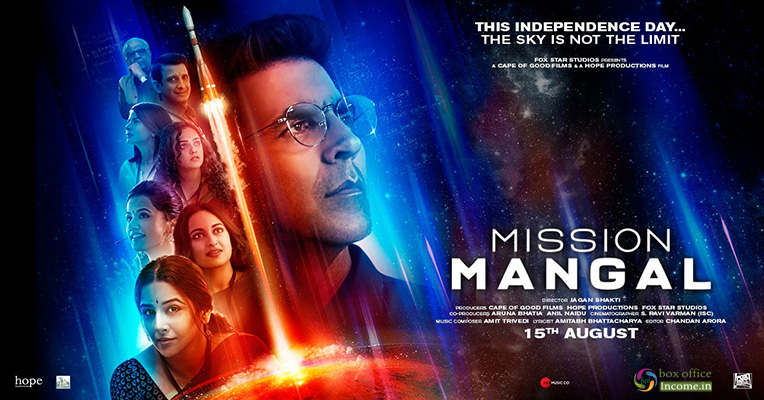 Starring Akshay Kumar, Vidya Balan, Taapsee Pannu, Nithya Menen, Sharman Joshi and Sonakshi Sinha, Mission Mangal is a film about, how ordinary people achieving the extraordinary. A Story that proves that Creativity, Ideas and Dreams have no limit. Just Like The Sky!

On July 5th evening, the actor took to twitter and shared the poster with his fans. He captioned the picture, “A story of underdogs who took India to Mars. #MissionMangal, the true story of India’s #SpaceMission to Mars,coming on Aug 15, 2019!”.

Early in the day, Akshay had opened up about the reason why he opted for the film. He had shared two pictures- one in English and other in Hindi, showcased few details about the film and its story line which is inspired from true events of India’s mission to Mars.

Akshay wrote, “#MissionMangal , a film which I hope will inspire as much as entertain. A film which I’ve done specially for my daughter and children her age to familiarise them with the incredible true story of India’s mission to Mars!.”

It was previously announced that Kumar’s production house Cape of Good Films and Fox Star Studios will collaborate for three films, which will have the actor in the lead. R Balki, who directed Kumar in Padman, will also serve as the producer for Mission Mangal.