Kartik Aaryan is surely going to start 2021 with a big Dhamaka. The actor who has been seen in fun and romantic roles, has decided to do something new in his next film. He has come on board for an interesting role in Ram Madhvani’s Dhamaka and the actor has started shooting for his next. 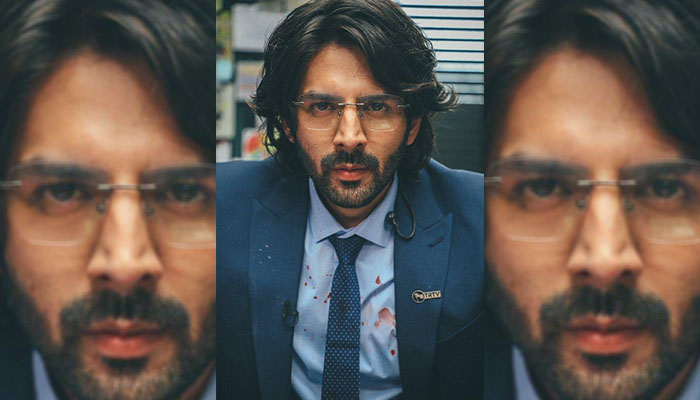 This morning Kartik Aaryan took to his social media to introduce us to his new reel-avatar. Kartik shared a sexy click of himself from the film, where we see him with long hair, a sexy pair of glasses on, an intense look on his face and a bloodied-shirt on.

The actor has captioned this picture saying, ‘Miliye #ArjunPathak se. #Dhamaka.  @RamKMadhvani #RonnieScrewvala #amitamadhvani @RSVPMovies @OfficialRMFilms’.  Now one look at this click and we know that Kartik Aaryan is challenging himself for a new and a completely different role. The actor has upped his game as an artiste and is surely in a mood to surprise and amaze his fans and moviegoers with this intense role.

Kartik Aaryan has started shooting for Dhamaka and this is his first project post lockdown that he has started. The film is produced by Ronnie Screwvala, Amita Madhvani and backed by RSVP Movies and RM Films.

The actor says that it’s an interesting script and its surely one of the most commercial films he has done till date. This Ram Madhvani and Kartik Aaryan collaboration is surely interesting and Dhamaakedaar!